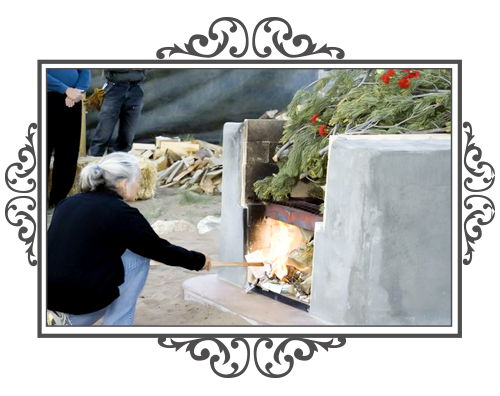 Crestone, Colorado is an outdoor human cremation facility in the United States.  Some may consider it an archaic tradition, but the facility in Crestone will perform a funeral pyre for anyone, regardless of their religion.

The facility is unique in the U.S. as it is a crematorium where family can participate in the outdoor cremation of a loved one.

The funeral pyre is constructed from a concrete and brick-lined hearth topped with a steel grate.

A body is ordinarily wrapped in a simple linen cloth, and then surrounded by juniper logs and branches.  If they so wish, the family can place the torch to the funeral pyre, a ritual that is significant in some religions.

The funeral pyre is perhaps best connoted in culture by references to the ancient Vikings.  It is still a death ritual practiced today amongst Buddhist and Hindu religions, although it is considered quite taboo in the United States.

With a move away from tradition in modern funeral rituals, and with the rise in a more ‘natural’ and ecological approach to the disposition of the dead, maybe outdoor funeral pyres may become more commonplace across the modern world.

The funeral pyre actually dates back to references in the Christian and Hebrew Bibles that likens the rising smoke from the pyre with the ascent of the soul.

The cremations in Crestone are performed by a volunteer group who assist families by coordinating the cremation service.

The project asks for a donation of $425 for each cremation, this helps to cover permits, and enables the group to offer grief counseling, repose the deceased prior to the cremation and prepare the kindling for the funeral pyre.

The project is also only geared to handle a limited number of ceremonies per year.

It takes about four to five hours for a body to burn completely, and as there is no way to separate the human ashes from the wood ash, the family receive about five gallons of ashes.

The type of ceremony depends entirely on the wishes of the family.  It can be anything from a very simple service, a quiet and private moment, to a more elaborate ritual with eulogies, music and singing.  The setting at the foot of the Sangre De Cristo mountain range make it the perfect place to absorb a sense of the natural aspect of a life celebration.