While in Pakistan to deliver disaster relief supplies to victims of the 2005 South East Asia Earthquake, the AAFS delegation were approached by scores of Hindus and Sikhs for help to lobby the Government of Pakistan for funeral pyre cremations grounds.

In the aftermath of the 1992 Ayodha controversy in India, reprisal attacks left 242 Hindu temples in Pakistan destroyed and all cremation grounds closed. Baba Ghai and AAFS (Pakistan) Representative Dr Munawar Chand brought the issue to the attention of Rana Ijaz Ahmed Khan, Law & Human Rights Advisor to the Government of Punjab (Pakistan) and went on to successfully lobby the Waqaaf Board (Evacuee Property Trust Board).

The Waqaaf Board agreed to provide a site on Lahore’s Bund Road on land originally allocated as a funeral pyre site (shamshaan ghat) in 1972 but, due to political tensions, that was never actioned. The provincial government of Punjab also agreed to fund construction of on-site facilities at the cremation grounds.

Prior to opening the Bund Road cremation grounds, Hindus and Sikhs had no choice but to bury their loved ones or arrange unofficial cremations. 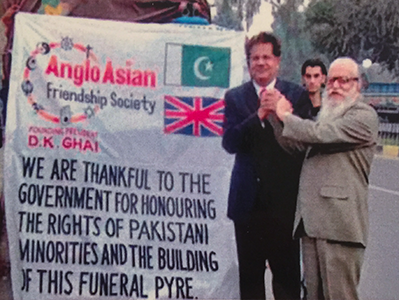 In Leeds County Court, 49 year old David Wrigglesworth was not prosecuted for cremating his mother in the garden of their family home, Judge James Stewart QC pronouncing that, “By cremating her body, the public might be surprised to hear, you committed no offence.”

In December, police officers and passers-by stood next to Grand Union Canal at Southall (Middlesex) watching a drowning man scream for help.

Witnesses were allowed to leave the scene and, for 6 months, the young man’s body remained in a Metropolitan Police mortuary but nobody came forward to claim it or assist the police appeal.

In March, Metropolitan Police’s Forensics Department recovered crucial data from the deceased man’s water-damaged mobile phone. Police investigators dialled the one telephone number they could retreive….and their call was answered by Baba Ghai. 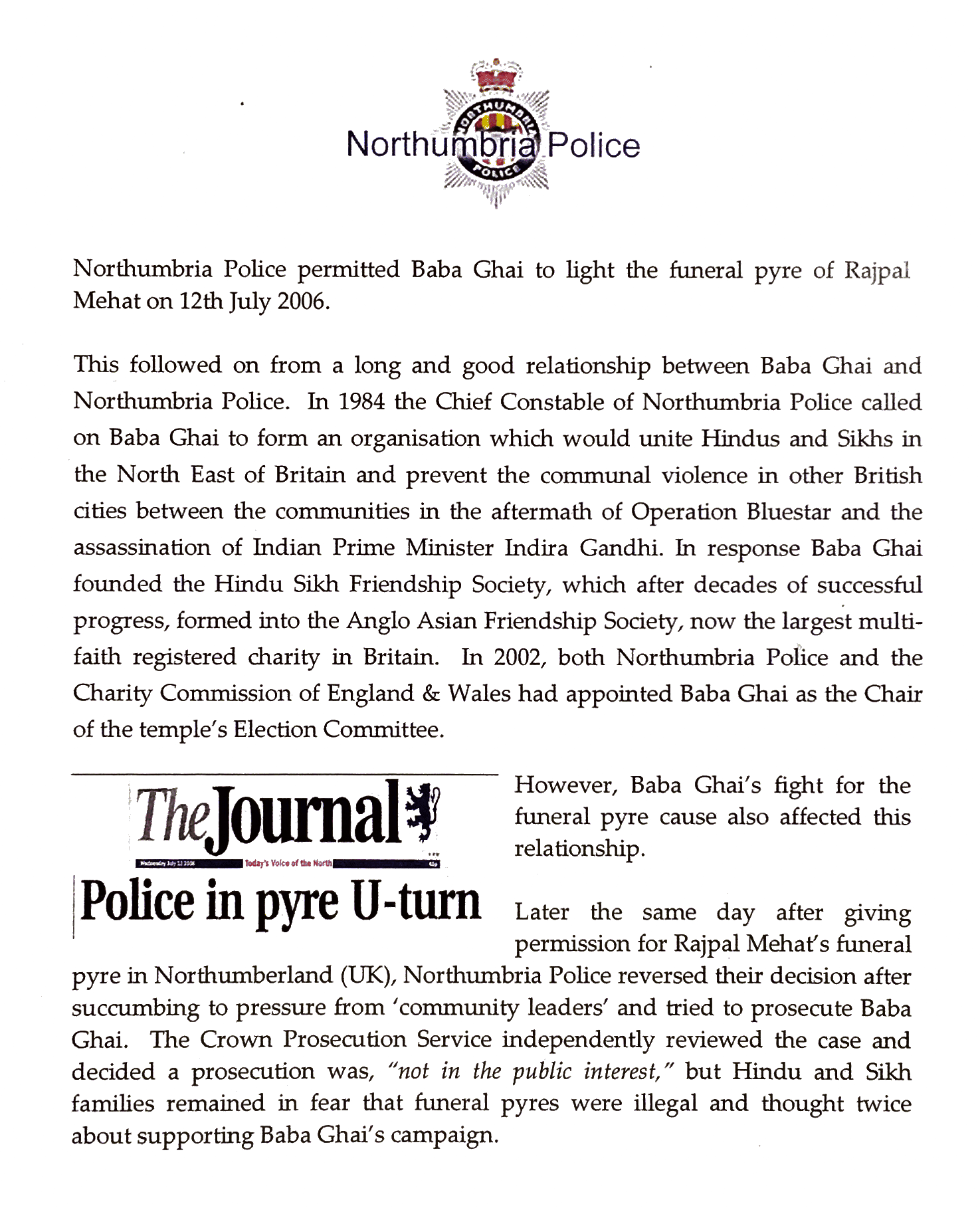 It transpired the deceased man had once attended an AAFS advice surgery, attendance records identifying him as Rajpal Mehat, a Sikh and the only son of (Late) Amarjit Singh and Mohinder Kaur of Punjab, India. Within days of receciving the call, Baba Ghai travelled to India to personally break the tragic news and console Rajpal’s mother and his sister, Miss Sonia Mehat.

Devestated by their loss and anxious that Rajpal had not received his last rites, both ladies pleaded for help to arrange a funeral pyre cremation, in the hope that could help bring peace to Rajpal’s soul. As the Uxbridge Coroner ‘s Office denied the family permission to fly Rajpal’s body to India, the only way to fulfill their wishes would be to perform the cremation in Britain.

Baba Ghai relented to their pleas but first launched a nationwide media campaign to obtain a British visa for Sonia, after her first application was denied on irregular grounds. Accompanying both ladies back to the UK, on 12th July 2006, Baba Ghai lit Rajpal’s funeral pyre on private farmland in Northumberland – with the blessing of Northumbria Police.

The very day of the cremation, however, soon after it was lit, Northumbria Police withdrew its blessing and claimed the funeral may have breached the Cremation Act 1902. The police forwarded a file to the CPS, which declined to prosecute because it was not, “in the public interest.”

To Mohinder Kaur’s immense relief, the nightly dreams in which Rajpal pleaded her for help, stopped the very day of his cremation.

Inspired by success in Pakistan in 2005, the AAFS further celebrated a successful campaign in Athens when the Greek parliament voted to legalise cremation. AAFS (Greece) Representative Mr Maghar Gandhi was a key figure in the campaign, representing the interests of Hindus and Sikhs in Greece who previously had been forced to transport their deceased to Bulgaria for cremations.

In the spirit of charity’s multi-faith ethos, AAFS delegates led by Baba Ghai and Operational Manager Kusam Vedhara also met with minority Christian and Muslim communities in the Hindu Kingdom of Nepal to review the sufficiency of burial provisions in Kathmandu.

Newcastle City Council rejected Baba Ghai’s proposal for a dedicated funeral pyre site on the grounds that they would breach the Cremation Act 1902 – eventhough the legal case law, historical precedent and the opinion of leading scholar Mr Stephen White all argued to the contrary.

Thus, in order to clarify the law, Baba Ghai lodged a judicial review against Newcastle City Council’s refusal – arguing that funeral pyres were not prohibited by the 1902 Act. In addition, funeral pyres were a central core of Hindu religious belief and practice and, therefore, qualified for preservation under the Human Rights Act 1998.

Baba Ghai brought the case as an individual but, if his interpretation of the law proved correct, the outcome would apply to everyone in Britain.

Despite being a disabled pensioner without income, the Legal Services Commission (LSC) refused Baba Ghai’s application for legal aid funding on the grounds that, “the prospects of obtaining a successful outcome are poor.” At that time, the case was only made possible by the willingness of barristers Rambert de Mello and Tony Muman to fight for free, which they did due to their belief in the cause.

Justice Sir Andrew Collins granted Baba Ghai permission to take his judicial review to the High Court, stating that funeral pyres were, “not necessarily unlawful,”  and the case was, “of some quite considerable importance to the Hindu community…and it will not go away.” (See The Times, 10th April 2007 for further details).

Following the ruling, the LSC withdrew its initial objection but still denied funding for a second time, arguing that other Hindu temples/organisations should fund the case (no such donations were received.) Conversely, the LSC also seized on the Hindu Council UK’s then opposition, which it reversed in 2009, after reviewing the expert evidence of Prof H.R. Sharma and clarifying that Baba Ghai was not calling for,”pyres in fields.”

The LSC did eventually provide limited funding but repeatedly delayed case preparations for several months at a time for the remainder of the case preparations, referring every spending request for review by the Special Cases Unit.

A number of independent organisatons, both faith-based and secular, formally joined the case in support of Baba Ghai’s campaign. The Alice Barker Welfare Trust argued that funeral pyres shared a similar ethos with Britain’s thriving woodland burial movement and offered a valuable opportunity for more natural, intimate and personal funerals. The Trust also drafted plans for cremation grounds that would satisfy the environmental health, fire safety and public decency requirements.

A corpus of UK Sikh temples comprising of gurdwaras in Hitchin, Wolverhampton and Coventry were represented by Prof. Satvinder Juss. They acknowledged that funeral pyres were not a Sikh religious requirement (the Rehat Maryada permits any form of funeral) but argued that many Sikhs in Britain would prefer pyres as a matter of culture and traditional practice – and that they should be entitled to that freedom of choice.

This followed the support of the Shiromani Parbandhak Committee, the ‘Sikh Parliament’ at the Golden Temple, which urged the Indian Prime Minister to lobby the British government to support Baba Ghai’s proposal. Eminent support also came from Shankaracharaya Dibyananda – the four Shankaracharayas are recognised as the final living authority for the Hindu faith, sharing a role broadly similar to the Catholic Pope.

The Ministry of Justice made a series of significant concessions in response to expert reports submitted by Baba Ghai. Following the report of Dr Ivan Vince, the MoJ conceded that a prohibition against funeral pyres could not be justified on public health or environmental grounds. Having first argued that funeral pyres were a cultural (but not religious) practice, the MoJ also conceded the religious significance of the practice following the report of Prof. H R Sharma.

Leading up to the judicial review hearing in the High Court, Minister for Justice Jack Straw appalled and outraged many – not only Hindus and Sikhs – by stating that the British public would find the very though of funeral pyres “abhorrent”.

The Hindu Forum of Britain’s response reflected the sentiments of many supporters: “To suggest a practice which has been carried out for thousands of years and still is by 800 million Hindus in India is somehow ‘abhorrent’ is insensitive and very unhelpful. No one, including Baba Ghai, has ever suggested doing outdoor cremations in public.”

Contrary to standard procedure, Baba Ghai was not informed of the High Court verdict in advance and was still in India receiving medical treatment when the verdict was announced. Speaking from India, Baba Ghai said, “I respect the decision of the Court but, for me, this is quite literally a matter of life and death. I shall appeal until the very end, in the faith that my dying wish will not go unheard.”

Months after the verdict, one of the campaign’s foremost supporters was assassinated in India. Mr Rulda Singh was President of the Rashtriya Sikh Sangat and devoted his life to public service and Relations.

He twice travelled to Britiain to promote the campaign at Sikh gurdwaras throughout the country and negotiate with extremist factions threatening to protest the hearing. Rulda Singh stood by Baba Ghai’s side at the High Court, standing for his conviction in the cause

Rulda Singh was shot outside his family home and died on India’s Independence Day after a week-long struggle for life at Chandigarh PGI Hospital in Punjab, India. Responsibility for the assassination was claimed by banned terrorist organisation Babbar Khalsa International, citing apparent, “anti-Sikh activities.”  Rulda Singh was a man of uncommon dignity and the Chief Minister of Punjab led the many, many tributes from Punjab’s political and religious leaders.

Following the intense struggle of spearheading the campaign for four years, Baba Ghai suffered a second stroke and, no longer able to repay repayments on loans taken to fund the campaign, his personal bank accounts were foreclosed.