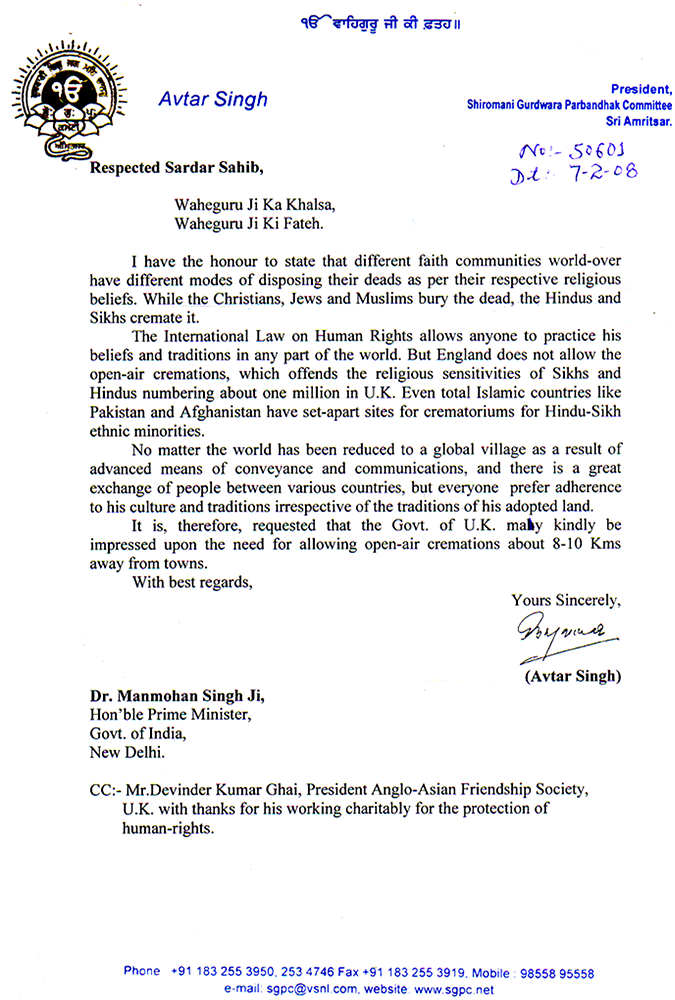 SGPC president Avtar Singh has written to Prime Minister Manmohan Singh to take up with the UK government the issue of allowing open-air cremations as it affects religious sensitivities of Sikhs and Hindus.

The Anglo Asian Friendship Society (AAFS), a multi-faith registered charity in Britain, has been working to get the right of open-air cremations in the UK for Hindus and Sikhs. It has received support of religious leaders and scholars in India in its campaign and has attracted considerable attention in the British media.

In a letter to the Prime Minister, the SGPC chief said different communities in the world dispose their dead according to their religious beliefs. The international law on human rights allows people to practise their beliefs and traditions in different parts of the world.

“England does not allow open-air cremations which offends religious sensitivities of Sikhs and Hindus who number about one million in the UK. Even Islamic countries like Pakistan and Afghanistan have set apart sites for crematoriums for Hindu and Sikh ethnic minorities,” he wrote.

Suggesting that the cremations could be held eight to 10 kms away from towns, he wrote in the letter that people settled in other countries prefer to adhere to their own traditions.

Andrew Singh Bogan, legal coordinator of the AAFS, told the Tribune that they have launched media campaigns to secure visas for families to attend funerals and transport bodies to India to the grieving relatives.

“We are inspired by the humane belief of the right to live and die according to one’s faith,” he said, adding that the AAFS founding president Baba Davendra Kumar Ghai has sometimes personally met the cost of transporting bodies to India.

Bogan said the AAFS has pursued campaigns in various countries for recognition of minority religious rights and have achieved success in Pakistan and Afghanistan.

“In Britain, Baba Ghai has spearheaded a well-publicised human rights challenge in legal history to establish open-air cremations,” he said.

Bogan said the British Muslim community has provisions for separate burial grounds but Hindus and Sikhs must perform their last rites in Chapels of Rest where it may take a week for a funeral to take place.

“Gas crematoria run the risk of ashes being mixed up as local authorities cremate many bodies simultaneously to save cost,” he said.

AAFS office-bearers in Pakistan including Munawar Chand, Sunny Kumar and Sunil Chand were part of the society’s delegation to India recently which met religious leaders and scholars.

Prof H.R. Sharma, head, Department of Veda in Banaras Hindu University, has termed the AAFS efforts as a landmark legal challenge to legitimise Hindu open-air cremation in Britain. Open air-cremation is an essential component of Hindu last rites, he added.

Bogan said Swami Divyanand Teerth of Jyotirmath Avantar Banpura Peeth has also supported the AAFS efforts to get the right of open-air cremations in the UK.